The following biography is taken from ‘Reminiscences of 70 Years’ by Father Denis Sheil, who died in 1962 in his 97th year. 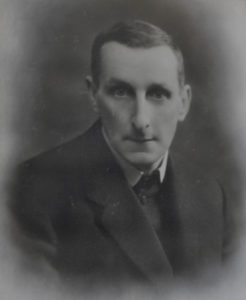 Nearly thirty years ago, on 7th December, 1933, F. Stanislaus du Moulin-Browne of the Birmingham Oratory died at Tenerife in the far-away Canary Islands, where he had gone for his health. F. Francis Stanislaus du Moulin-Browne was a nephew of F. Joseph Bacchus, about whom there was an article a few months back. He received most of his education on the Continent, and the most important of his schooldays were spent at Einsiedeln near Zurich in Switzerland, where the large, ancient Benedictine monastery has run a boarding school for many years. From there he went to the English College in Rome, where he remained for seven years without returning home for a vacation, and where he did brilliantly at the Gregorian University, taking a Doctorate in Philosophy and a Doctorate in Divinity. He was ordained priest in the Spring of 1914, and in the Autumn of 1915 he joined the Oratory.

The First World War was on, and after a year the Army claimed him as a military chaplain, and he was attached to the 1st Battn. of the Irish Guards in France. The Guards were always to the fore when any heavy fighting had to be done, but F. Stanislaus enjoyed Army life – he was always in the forward line, doing all he could for the troops under his care, and was most popular with all the ranks. He was awarded the Military Cross ‘for conspicuous gallantry and devotion to duty’, and during the months after the Armistice his fluent German enabled him and his brother, F. Joseph du Moulin-Browne, who was also a chaplain, to do great work among the German prisoners.

He was demobilised and returned to the Oratory in 1920. Here we may note that Oratory Fathers – unlike other religious orders – do not normally take another name, but retain their own when they join the Oratory. His was Henry Francis Stanislaus, but at the Oratory when he arrived there were F. Francis Morgan, his uncle F. Francis Bacchus, known by his second name F. Joseph, and F. Francis Vincent Reade, known as F. Vincent. As he couldn’t take his first name, he elected to take Lewis, as he had a devotion to the Saint of that name. On his return from the war, he found that F. Louis Bellasis had returned to the Birmingham Oratory after twenty-five years in the Roman Oratory, and so to avoid the confusion of having a F. Louis and a F. Lewis in the house at the same time, he then took his second baptismal name Stanislaus.

He began his normal peacetime life here full of enthusiasm; he became House Minister, having responsibility for all domestic matters both in the Oratory as well as the Oratory boarding school, which was then located on the present site of S. Philip’s Grammar School. He also made his mark in the Little Oratory.

He was never in robust health – having been gassed in the war aggravated his already weak lungs – but he was devoted to his ‘nido’ or nest, as S. Philip used to call his room in the Roman Oratory, and what spare time he had was spent there in study of theology, in which he always retained great interest. Not many years passed before his lungs began to give him trouble, and it became necessary to spend his winters in a warmer climate. He always hated leaving his room at the Oratory, but while away from home and his books he spent much of his time painting in the open air, both in oil and water-colour. He was really an amateur painter of more than average ability, and many of his works done on the Island of Saark and various parts of Italy and elsewhere can still be seen in the Oratory House.

When he went to the Canaries in the Autumn of 1933, many felt that he would not come back – including the invalid himself. He was buried at Tenerife, but on the news of his death a solemn Requiem was sung for him at the Oratory, and about eighteen months later his remains were brought back to England and buried in the cemetery of the Fathers at Rednall. He was forty-five years of age when he died, of which eighteen were spent in the Congregation.