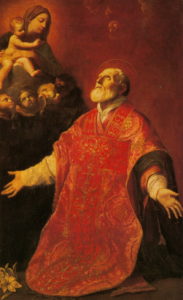 St Philip Neri was born into a prominent family in Florence in 1515, although the financial fortunes of his family had declined by the time of his birth. He was educated by the Dominican friars in Florence, where he learned to venerate the memory of the fiery Florentine friar, Savonarola. As a young man he was sent to work for his uncle in San Germano, near Monte Cassino, who planned to hand over his business to Philip. It was here, while living in the shadow of the Benedictine abbey at Monte Cassino, that Philip gained a profound love for the sacred liturgy and an appreciation for the wisdom of the desert fathers. Philip had little interest in taking over his uncle’s business and within a year had gone to live in Rome.

When Philip came to Rome he lived with a Florentine family who gave him lodgings and food in return for teaching their two sons. His real joy, however, lay in spending nights in the catacombs in prayer. He had a great affinity with the early Christians, and in his Litany of St Philip, Newman calls him Vir Prisci Temporis or Man of Primitive Times. In his early years in Rome, Philip pursued philosophical and theological studies with the Augustinians in the city, but was content to remain as layman. Contemporaries noted his great eloquence in theological matters, but Philip didn’t see his studies as an end in themselves and happily sold his text books to give financial help to other students.

In 1544 Philip had a mystical experience, while praying in the catacombs of San Sebastiano, in which he felt the Holy Spirit enter him in a special way, and from that time onwards he had a great feeling of warmth in his heart. Philip hid this experience for most of his life, and only in his last years did he confide in his trusted friend Pietro Consolini about the experience.

Philip had a magnetic personality, and when he wasn’t teaching the two boys, he used to walk the streets of Rome, engaging young men in pious conversation. At that time in Renaissance Rome, there seem to have been many young men with little to do after lunch. Philip hoped that he could draw these men out of their idleness and towards the pursuit of holiness. One of his favourite phrases was ‘when shall we begin to do good?’. During his fifteen years as a layman Philip attracted a strong following. His first companions were mainly Florentines and craftsmen, but he later attracted the attention of courtiers, artists and musicians. He used to bring these young men together for prayer, sermons and music. When the numbers were small the meetings were informal, but as numbers grew it became more structured. These gatherings were the beginning of what would become known as the Oratory.

Philip wasn’t content only to discuss holiness, but was keen that he and his companions would live it. He was especially conscious of the needs of the sick, and he and his companions visited them in hospital. At this time, conditions in hospitals were grim and patients relied on volunteers to nurse them. While this was a valuable work of mercy, it also served as a source of mortification for himself and his followers. Philip was more concerned to mortify the reason of his followers than their bodies, which sometimes resulted in mortifications which appeared bizarre to onlookers. For example, he insisted on one of his followers, Tarugi, carrying Capriccio, a dog who had originally belonged to a cardinal but who became attached to Philip.

In 1550 Philip founded the Confraternity of the Most Holy Trinity to look after pilgrims in the Jubilee Year. That same year, after living for fifteen years in Rome as a layman, he reluctantly agreed to be ordained a priest so that he might be of more service to his companions. He had already completed his studies, and so it was possible for him to be ordained soon afterwards. He went to lodge in a house for priests attached to the Church of San Girolamo. Philip had always preached the value of frequent confession and communion, and as soon as he was ordained to the priesthood, he himself became a valued confessor. He directed many young men into religious life, but encouraged some of his penitents to remain at court, where he hoped they would have a positive influence on those around them. As a priest he spent his mornings hearing confessions and said the last Mass of the morning around noon.

Owing to the originality of Philip’s apostolic methods, it is not altogether surprising that he fell under the suspicion of the authorities. His processions through the city and the rumours that he allowed lay people to preach at his meetings were sources of particular concern, though any sincere investigators were forced to conclude that his orthodoxy was beyond reproach and that his good works were edifying and admirable.

Towards the end of his life he became a trusted advisor of Popes and Cardinals, among others. After a while, Philip had some of his followers ordained priests. These included Tarugi, who was forced to carry the Cardinal’s dog, and Caesar Baronius, who became famous as a writer of ecclesiastical history. In 1575 St Philip was given the church of Santa Maria in Vallicella. It was soon pulled down, and a new church, still known as the ‘chiesa nuova’, was built on the same site. The relics of St Philip now lie in that church, beneath his altar, which is still the home of the Roman Oratory.

On the 12th of March 1622 Philip was canonized by Pope Gregory XV, along with Teresa of Avila, Ignatius of Loyola, Francis Xavier and Isidore the Farmer. His feast is kept on the 26th of May.