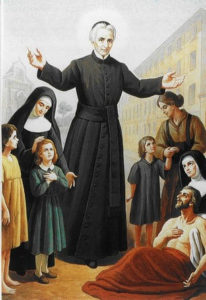 In 1806 Carlo Filaferro entered the Congregation of the Oratory in Udine. This Oratorian house had been founded in 1650 and served the church of S. Maria Maddalena (now demolished – the Central Post Office occupies its site). Carlo was ordained priest in 1809, but the following year the Congregation was suppressed, and the twelve Fathers and three Brothers were expelled from their house and church. We need to remember that this was the age of Napoleon and of short-lived revolutionary governments – a time of difficulty for the Church, when so much of the cultural, spiritual and material heritage of Catholic Europe was wrecked. It was on the orders of the Napoleonic regime in northern Italy that the Oratory was suppressed. F. Carlo returned to live with his mother, stepfather and their children, and probably taught the little ones their first lessons in the Faith.

Peace returned to Italy in 1814, and in the years that followed the young Luigi became more and more convinced of his own priestly vocation. In 1817 he became an external student at the Archdiocesan Seminary in Udine and was conspicuously successful, with a brilliant academic record. He was ordained priest on March 31st, 1827, the Saturday before Passion Sunday, in Udine Cathedral, and said his first Mass the following day in the old Oratory Church of S. Maria Maddalena. The former Oratorian priests still served the Church and many of the old Oratory practices and devotions continued.

Luigi brought to his priestly work a character both forceful and concentrated, and although he was both clever and articulate, he was never given to self-expression or the vaunting of his own merits. He soon became involved with his half-brother, Carlo, in helping to run the ‘Casa delle Derelitte’, an orphanage for girls, situated close to the Oratory Church. The orphanage had been founded in 1816 by F. Gaetano Salomoni, from the suppressed Oratory of Mantova, a town in the Po Valley, halfway between Bologna and Brescia. By the end of 1817 there were some forty girls and women there and F. Carlo had joined the work. F. Luigi worked hard for these destitutes, and a series of bad harvests meant he had to devote much time to begging in the streets and shops to obtain food for the girls’ supper. Perhaps this experience was the cause of the desire he expressed at this time to become a Capuchin Friar; more difficulties, including an outbreak of cholera, led him to abandon such hopes. A new house was obtained and a steady supply of money put things on a better footing. By 1840, F. Luigi was the guiding light of the institute. At the same time, he began to lay the foundations for other such houses for poor girls, children and deaf-mutes. He recruited several schoolmistresses to help him in his work – these soon decided on becoming nuns. On Christmas Day, 1845, fifteen of them received the habit and were constituted as a religious congregation, known as the Sisters of Providence, under the patronage of S. Gaetano.

Whilst these developments were taking place, there were also moves to re-establish the Oratory in Udine. The first, unofficial, regrouping took place in 1842, and in 1846 the Oratory was formally reopened, with the surviving Fathers from the suppression of 1810 returning to their house and church. F. Carlo was elected Provost and held the position until his death in 1854. F. Luigi received the Oratorian habit and began to devote much of his time to the Christian formation of the working and student youth of Udine. During the revolution of 1848 he worked tirelessly amongst the wounded.

In 1856, F. Luigi was elected Provost of the Oratory and found himself the superior of a group of six priests. Soon after his election the fortunes of the Udine Oratory took a turn for the worse, and as there were no local vocations, Fathers were lent from other houses in order to support all the works that were going on.

The advent of Italian unification in the 1860s and the arrival of an anti-clerical government resulted in the passing of a law suppressing all religious congregations. This was a death-blow for many Italian Oratories. F. Luigi fought fiercely against the application of this law, and although he managed to preserve the Sisters of Providence, the Udine Oratory was suppressed in 1867. This was the end of Luigi’s community life as an Oratorian, but not the end of his devotion to S. Philip and the Oratory. He maintained Oratorian principles and practices to the end of his life, always signing himself ‘F. Luigi of the Oratory’. He left his possessions to the Congregation should it ever be re-established, and left instructions that on his grave the words ‘Presbyter Oratorii’ should appear.

The remaining years of Luigi’s life saw him devoted to furthering the work of the Sisters of Providence and also acting as a redoubtable champion of Blessed Pope Pius IX and his policies. After an illness of three months, he died on April 3rd, 1884, and was buried in his home town of Udine.

In his spiritual life Luigi had a great devotion to Our Lord as a poor and humble man, and he taught the Sisters to see Christ in the poor and the suffering. Luigi also had a great love for Our Lady, especially Our Lady of Sorrows, for S. Joseph, and, of course, for S. Philip, whom he strove to imitate closely, especially in his love of humility and retirement from the gaze of the world. Also like S. Philip, a spirit of cheerfulness and gaiety marked Luigi’s life. His complete indifference to earthly reputation and honour was reflected in what he said to his nuns as he lay dying: ‘I do not want this poor man even to be remembered’.

The likelihood of this last wish being respected was always remote. Miraculous cures through Luigi’s intercession were reported within days of the Saint’s death – one was the restoration to health of a dying child. Interestingly, the miracle which has secured the canonisation is in the same line as the earliest one recorded.

It happened in 1996, when Peter Changu Shitima, a young catechist from Zambia, was at home, dying from AIDS, a disease now endemic in many parts of Africa. Doctors had decided that nothing more could be done for the young man. One witness said: ‘He could scarcely lift his legs, and had developed a serious case of peripheral neuritis. He could not stay in bed without help. He was a terminal AIDS patient and nothing could be done.’ Peter’s parish began to pray to Blessed Luigi for him, as he was his favourite figure, one with whom he especially identified. On the night of October 9th, 1996, Peter dreamed of Luigi, and the following morning he woke up feeling completely better. One of the doctors involved in the case, Dr Pete de Toit, has said: ‘I sent him home because he was a terminal patient, and he returned brimming with health.’ The doctors agreed that there was no medical explanation for the cure, and the Pope recognised that what had happened was indeed a miracle. The necessary documents were signed by the Pope on July 1st, 2000, allowing the canonisation to proceed.

Peter Changu is now a priest in South Africa and was present at the ceremony in Rome on June 10th, 2001.

S. Luigi’s feast will henceforth be kept on October 5th each year.

S. Luigi Scrosoppi, pray for us!