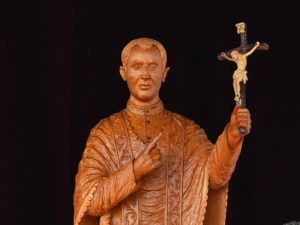 Joseph Vaz was born on 21st April 1651 in Goa, which at that time was the capital of the Portuguese colonies in the Far East. His devout parents brought him up in the faith and he studied humanities with the Jesuits and theology with the Dominicans. Ordained priest in 1676, he worked for several years in the Kanara region of Southern India.

After nearly ten years in Kanara he returned to Goa, and in 1686 he founded an Oratory of Saint Philip Neri there with a group of other priests, receiving advice and help from the Oratorian houses then in Portugal. Only one year later, in 1687, he felt called to leave Goa and go as a missionary to the island of Ceylon (now Sri Lanka), where he knew that Catholics were being persecuted and where there had been no priests for several decades.

He remained on that island for twenty four years, exercising his heroic priestly ministry in very restrictive circumstances. He was rigorously pursued and persecuted by the oppressive Dutch Calvinist authorities who wanted to put an end to his single-handed yet successful efforts at rebuilding the Church and keeping Catholicism alive in Ceylon. He had to travel everywhere in disguise and was obliged to celebrate the sacraments secretly at night.

Fr. Vaz decided to make his base in the kingdom of Kandy in the island’s interior. On his arrival there he was arrested as a spy and put in prison. He was released after he had prayed for and obtained what was regarded by all as a miraculous fall of rain, ending a prolonged drought. After that the Buddhist king of Kandy gave him his personal protection.

In 1696 several Fathers of the Oratory in Goa joined him in Ceylon and a properly constituted Catholic mission was established there. Fr. Vaz refused the position of Vicar Apostolic, preferring to remain a simple missionary priest. Among his other pastoral work he translated a catechism and prayers into the local languages, Singalese and Tamil. The people called him ‘Sammanasu Swam’ – the angelic priest.

By the start of 1711 he knew he was dying. On 16th January he received the Last Rites with members of his flock gathered around his bed. He told them, “Always live according to God’s inspiration.” At midnight, with a candle in his hand, he died pronouncing the holy Name of Jesus with great clarity and fervour. He was sixty years old.

Fr. Joseph’s devotion to the pastoral apostolate made him a timely and efficacious instrument of divine Providence at a critical moment in the Catholic missionary history of South East Asia. During his lifetime his pastoral successes brought him to the attention of the Church authorities in Portugal and Rome. After his death the exemplary zeal he had shown as a missionary made him a continuing inspiration for the missionary priests of his adopted island and beyond. His apostolate there left a tremendous legacy: 70,000 Catholics, 15 churches and 400 chapels. He became known as the Apostle of Ceylon.

Unfortunately the exact whereabouts of his remains is uncertain.

He was beatified in Sri Lanka by Pope John Paul II on 21st June 1995, and was canonized there by Pope Francis on Wednesday 14th January 2015.