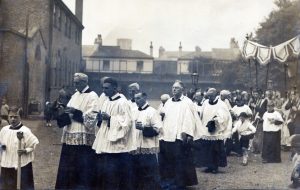 The Blessed Virgin Mary is personally involved in the unfolding of God’s plans for every single human soul. The Almighty has chosen to involve her in everything to do with the salvation of the human race.

Our blessed Lady’s ongoing role in the economy of redemption was one of the reasons she was taken to heaven at the end of her earthly life.

In perfect imitation of our Saviour, our heavenly Mother loves each one of us equally. With Christ the Lord, and so also with His Mother, we are all equally favourites, all equally special.

Among all the Lord’s disciples, we can be confident that His priests receive the Blessed Virgin’s fullest attention. It could not be otherwise. Her work in heaven is to co-operate with her Son’s plans. His plan is for our salvation. His priests are the unworthy but chosen instruments that He has instituted for the furthering of that plan.

Jesus of Nazareth ordains His priests to share in the work of His own eternal priesthood. He calls them to speak and to act in His name; at His font, in His confessional, in His pulpit, at His altar.

To ensure that His priests would never lack the graces they need to carry out those tasks, He gave them His own Virgin Mother to be their Mother also. He gave them to her so that she might nurture them as she had nurtured Him throughout His incarnate life.

He gave them our Lady so that they might have her name to call upon at every moment, a name to live with, and a name to die with: the most holy name of Mary, Queen of the Clergy and Help of Christians.