This recollection is drawn from the Oratory Parish Magazine for February 1904. 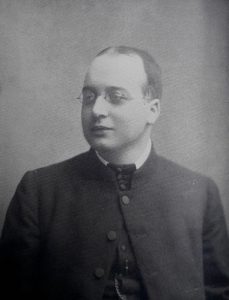 F. Ralph Blakelock joined the Oratory in 1895 after ‘a brilliant career’ at Oxford, after which he became a Catholic.

His death in 1904, at the age of just 36, is described by F. Denis, who had taken F. Ralph to the Riviera in the hope that the climate might effect some improvement of his health.

Their final stop was in Fiesole outside Florence, where they arrived on New Year’s Eve. Here F. Ralph put himself into the care of the English Nursing Sisters, who had ‘a European reputation for skilled nursing’. He was ‘wonderfully happy in his surroundings’, and it was said to be a matter for profound thanksgiving that it all happened as it did.

I will try and give exact details. On Monday evening (the 4th) after a good day, he complained of being a little faint. This passed off. But at 8.45, when a Sister happened to be in the room, he complained of a difficulty in breathing; she ran to fetch the Superior, who was close by at Recreation, with the other Nuns. He was reclining on a sofa, where he had spent the day, propped up by pillows to keep off the cough. She at once saw that his condition was alarming, and asked him if he would see a Priest. He nodded affirmatively. Meanwhile they gave him Caffeine and Oxygen, and kept him alive till he had had all the comforts of religion. A Priest who happened to be staying in the house – a Father Smith – came, and he went to Confession. He then urgently asked for Viaticum. Fr. Smith asked him if he should anoint him first. “No, quick, Viaticum first, and go just as you are, never mind dressing.” The Nuns had got everything ready – key of the Tabernacle, candles, etc., and there was no delay. While waiting, Fr. Ralph took hold of the Crucifix hanging from the neck of one of the Nuns; she thereupon took it off and gave it to him, and he put it on the table in front of him, and remained fixed in contemplation of it until the end.

One of the Nuns said “Our Lord must love you very much to arrange such a happy death,” to which he replied, “I wish I loved Him.” Presently the bell was heard announcing the arrival of the Blessed Sacrament. When the Priest entered carrying it, Fr. Ralph turned up his hands towards It, with an eager longing look, which deeply moved all the bystanders. When Fr. Smith approached to give him Holy Communion, he bent eagerly forward, and having communicated, he fell back, and remained passive with eyes on the Crucifix till he died. They then anointed him, but though he was conscious, he was sinking fast. They said the prayers, and he died at 9.30.

The sisters said unanimously ‘that they never saw a holier or more consoling death’ than that of F. Ralph.