The following reminiscence was given during a chapter address by F. Philip Lynch on 15th October, 1984.

The room I now occupy was inhabited for many years by F. Joseph Bacchus, until he died in 1937. I used to visit him there two or three times a week and perhaps find him doing algebra sums for mental exercise: for he was never ‘an ordinary person’. Francis Joseph Bacchus – FJB as he always signed himself – was one of the eight early Oratory School boys who joined the Congregation. He had another priest brother, John Bacchus, who ended his pastoral days as P.P. of Goring-on-Thames.

F. Joseph (there was already a Francis Morgan here) joined the community in 1881, having spent one year at the Venerabile in Rome. He did his ecclesiastical studies in the House, took an external B.A. at London University and was ordained deacon in 1881, but he was not raised to the priesthood until October, 1884, three and a half years later. During these years his interests were patristic and early Church history. There are several articles in the first edition of the Catholic Encyclopaedia by F. Joseph.

F. Joseph never made any serious study of JHN until around 1910, when Wilfred Ward was at the point of publishing his ‘Life’ of John Henry Newman, and the Fathers were worried in case Ward – in all good faith – might misrepresent JHN as a modernist. After the death of F. William Neville there was no JHN specialist, and it was this work of Ward’s that prompted F. Joseph to a really deep and thorough study of Newman. He got out the edition of Newman’s Catholic Sermon Notes in 1913, and ‘Correspondence of John Henry Newman with Keble and Others’ in 1917 – ‘edited by the Fathers of the Oratory’. His greatest contribution to Newman scholarship was the long article which he and F. Henry Tristram wrote for the Dictionnaire du Theologie Catholique in 1931. The most valuable work F. Joseph did for Newman was to encourage serious Newman scholars to read and interpret him correctly – especially with the Polish Jesuit, F. Przywara, with his plans to make the real Newman accurately known on the Continent.

So much for his work on JHN. In the Community, F. Joseph was allocated work in the Parish and in Bearwood, for which the Fathers were responsible for many years. He was P.P. until the work was taken over by F. Charles after the Great War. His parish visits were regular – six a day – but when he got to the homes, he was at a loss to make conversation: ‘Have you many flies about?’ – unless with a family like the Parkers, where he always enjoyed their company. 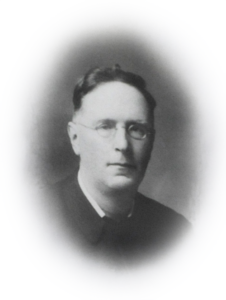 His sermons were of his own particular brand – one had the impression that he was making them up as went along. On one occasion, the then-Archbishop of Glasgow heard one of his 9.30 sermons to the children; he asked me ‘Who was that preaching? – a very sensible sermon!’ He looked very dignified in a cope – but he was not often put down either as celebrant or a sacred minister, as he sang the chant in a minor key and always went back to it.

When the Oratory School moved to Caversham and F. Henry Tristram moved with it, F. Joseph used to come down once a week to hear the boys’ confessions and to talk about JHN to F. Henry. He liked to go to Rednal on Mondays after the Chapter and General Congregation. ‘It is good to be alone at times,’ he used to say.

He had a number of regular penitents. ‘What a very unpleasant person you must be to live with,’ he said to a lady penitent, who passed it on to me, and she added, ‘he was quite right’. Those outside the Community would be astonished if they knew that on two occasions – with an interval of 21 years – F. Joseph was all but elected Provost. In 1902 – the year after I came to the Oratory School – F. Ignatius Ryder had been Provost for twelve years. At the election it was not until the 7th scrutiny that F. Ignatius was re-elected, F. Joseph being runner-up. Again in 1923, F. Richard Bellasis had been in office for three trienniums, but it was only after 8 scrutinies that F. Denis Sheil was elected Provost. F. Joseph certainly looked like being elected until one Father changed over at the eighth scrutiny. F. Joseph was far too much of a… ‘I’m too slack,’ he said to one priest!

In his latter years, when his health began to deteriorate, F. Joseph suffered much discomfort from a perpetual irritation in his head, which they tried to operate on, but without much success. His last days were spent in the Hospital of SS John & Elizabeth – he wished to be there so as to be in the medical care of Dr Frank d’Abreu. I used to take a 6s. excursion to go to see him.

F. Joseph was different from all the rest of us, but I do not think that there has been any Father to whom the Community owes a deeper debt of gratitude. I hope the Fathers will bear with me if I relate one more incident towards the end of F. Joseph’s years in the Community.

The Annual Bazaar in aid of the Parish Schools lasted three days and occupied all three floors of the Parish Hall. Many parishioners were involved in it in various capacities. On each day at 4pm the Bazaar was formally opened by a distinguished visitor, supported on the platform by one or two prominent parishioners, with F. Charles, Prefect of the Parish Schools, and F. Denis, who had the tactful office of giving the crowd a lead in showing approval or otherwise during the speech. F. Joseph was among the crowd below – so was I, and happened to be beside him when he put a hand on each shoulder of a little boy in the crowd and said:

‘If you are a very good boy, and work very hard at your lessons, one day you may be on a platform like that, opening bazaars.’