The following reminiscence was given during a chapter address (undated) by F. Philip Lynch.

Here are some facts and recollections of the third Provost of this House, a great contrast from the first and second. John Norris described himself as a North Countryman and came, in fact, from Crosby, not far from Liverpool, which was entirely English and all Catholic. He was educated at Ushaw, the seminary for the Northern Dioceses, with a curriculum covering the humanities, philosophy, and theology. There were some lay students there, but the vast majority were candidates for the priesthood.

It was as resident sacristan that he first came here to the Oratory. In passing, until we gave up Doubts, one of the sacristan’s duties was to wait in the refectory, and he himself ate at second table. The exact date of his first arrival here is unknown to me, but he had already had a job in Lancashire. He was admitted to the noviciate in December, 1865, at the age of twenty-two, and was ordained in the old Oratory Church four years later in 1869. His studies were apparently done at Oscott; he is recorded as receiving the tonsure and minor orders as well as the subdiaconate and diaconate in the College Chapel. He is recorded as having various duties – some during his noviciate – implying that he had been accepted by the Ordinary for work in the Diocese. He was ordained at 26. 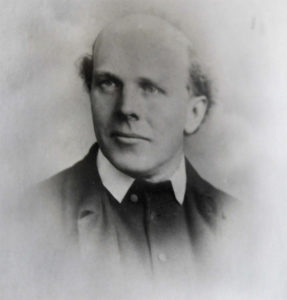 At that time F. Ambrose St. John had been in charge of the Oratory School, since he had taken it over when F. Nicholas Darnell left, a year or so after its setting up in 1859. There are good grounds for assuming that F. John began helping in the School after his ordination, for he was in his early thirties when F. Ambrose had a serious breakdown in health, followed by his death in 1875. F. John Norris had become Prefect of the Oratory School, an office which he held almost till the end of his life.

For the next thirty-five years, the Oratory School, with its seventy boarders and a small lay staff, was F. John’s work: the domestic staff was in the charge of the F. Minister of the time, and some other Fathers took an occasional class. The Cardinal himself was always interested, supervising and examining the boys or giving a talk, but these became less frequent as he got older. There were times when the Cardinal thought that F. John was inclined to take too much on his own responsibility, but there were no governors’ meetings, and in practice the Father Prefect had the last word.

As the years went on he acquired quite a reputation in the Catholic world as an educationalist, and the annual Latin play – which the Cardinal was much involved with – put the Oratory School on the map. Some Fathers in the community thought that the School was not sufficiently academic, and in 1903 F. Ralph Blakelock was appointed an additional assistant: he had been a successful lay master in the School before joining the community, and a good scholar, but he was not a success; he pulled out after a year and died not long afterwards.

As is manifest from the picture in the Chapter Room, F. John became quite bald, except for a thin rim of hair, which soon became white. He was of middle height and heavily built, and had to use very strong spectacles. In the breast pocket of his cassock was a large silver snuff box, and he always wore a biretta. His keys at the end of a chain could always be heard as he passed from his room on the ground floor in the School through the small schoolroom passage on to the first floor of the House, where his bedroom was the first, inside the door. It was through this room that, in 1908, the chimneystack fell through the room above, carrying F. Henry Tristram. F. John told us at the time how thankful he was not to have been killed, which he most probably would have been had he been in his room at the time.

F. John had no patrimony, and was allowed to draw £50 a year from the School funds as an allowance. The fees were about £100 per annum a boy.

Once in his life he visited Rome. He used to tell us how very impressed he was by Pope Leo XIII. As far as I know, that was the only occasion he left England.

He normally said Mass in the School Chapel – now the College kitchen – after which he read a portion of the Synoptic Gospels to us. And a talk was given to the boys every Sunday afternoon, followed by Benediction. These were taken as semi-inspired!

A serious illness early in 1901 shook him badly, but he recovered sufficiently for the Fathers to elect him Provost in 1905 in place of F. Ignatius. He remained in School as usual after the election. The New Church was in process of construction and there was considerable controversy, not minimised by the fact that the architect was a nephew of one of the Fathers, but there was a good Church at the end of it all for £45,000.

He became a co-opted literary executor of the Cardinal for the delicate negotiations with W. G. Ward over his biography – who at the same time was a ‘parent’ of the Oratory School.

I have no recollection of seeing F. John act as celebrant at community High Masses in Church, though he would always be in choir. He preached in the Church from time to time. After he had become ‘Father’, F. John carried on his work in the School just the same as before. He also took over as Novice Master, and at one time had three novices, all former assistant masters in the School.

The Golden Jubilee of the Oratory School

The year 1909 was the Golden Jubilee of the Oratory School: F. John had been Prefect for most of those years. By now seven old alumni were Fathers in Birmingham, another at the London Oratory and another at the Chiesa Nuova. There were other priests as well – I can recall a Dominican, a Franciscan, a Redemptorist and a couple of secular priests. There were half a dozen in the then-House of Commons – represented in all three parties, Liberal, Conservative and Irish Nationalist, and a few in the House of Lords as well. The School’s academic record was modest, but there was a Don at Oxford, and a Doctor of Scripture in Rome and a Doctor of Law at Liverpool.

The Latin Play was revived for the Jubilee year after some years’ lapse. The powers that be decided to confer on F. John a D. D. honoris causa at the annual School Prize Day. Dr Ilsley, Archbishop of Birmingham, conferred the degree in the big Schoolroom. It was years later that I realised that the impressive Latin document he read before receiving the degree was Pope Pius X’s oath against Modernism.

F. Edward Pereira took over the School the following year. In 1911 F. John was re-elected Provost for the third time, and died the following October aged 69 years, of which 47 had been spent in the Congregation.