The Birmingham Oratory was founded by St John Henry Newman on 1st February 1848. He was ordained a Roman Catholic priest in Rome in 1847. In Rome he joined the Congregation of the Oratory founded in the 16th century by St Philip Neri later known as the Apostle of Rome. The Oratory in Birmingham was first established in Maryvale, then moved to a converted gin distillery in Digbeth, and finally settled at Edgbaston in 1852.

After Newman’s death in 1890 it was decided to replace the first Oratory church with a larger building as a memorial to him.  The architect E. Doran Webb (1864-1931) was commissioned and the foundation stone was laid in 1903. The church is built in a classical style which evokes early Italian baroque and is an example of Edwardian baroque architecture.

The total length of Doran Webb’s church is 198 feet, of which the Nave accounts for 152 feet: the total breadth is 57 feet of which the Nave is 45 feet. The ceiling rests directly upon an architrave and is tunnel-vaulted instead of the flat roof more usual in basilica-style buildings. Lighting is provided by dormer windows set into the roof and from four rectangular windows in the drum of the dome.

A detailed history and guide to the Church is available to read here. 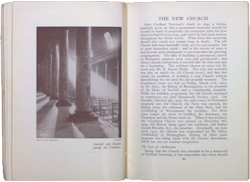