The following reminiscence was given during a chapter address by F. Philip Lynch on 4th February, 1985.

In the year 1906 there came to the Oratory School a new Classics Master, who had recently taken a second in Greats at Oxford. After a year he joined the Community and became F. Henry Tristram. I was to see a good deal of him in the next forty years – in the Oratory School, at Caversham and here in the Oratory House.

Soon after joining the Community he was thrown through his top floor room when the chimney stack fell, falling onto a bed from the first floor room into the ground floor parish library, from which he walked out! He was never the same afterwards. Like his contemporaries, F. Sebastian Ritchie and Walter Heurtley, he did all his ecclesiastical studies in the house. Like F. Joseph Bacchus he only took up the Cardinal rather late in life – his natural tastes were the Classics, especially Greek. He taught part-time in the Oratory School and was much involved in the Little Oratory Brothers, then a very important part of the Oratory apostolate. 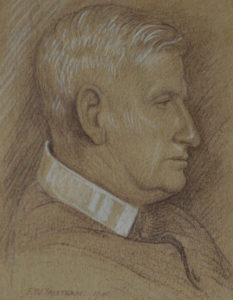 After the War, in 1918, when the question of moving the Oratory School out of Birmingham came up – a question that was controversial in the house – Henry was against the move. But when it was decided on, he was one of the three Fathers who went to Caversham. He was Rector and remained there until the Fathers sold the property to the BBC. He always spent all his vacations in Birmingham and it was during the Caversham days that F. Joseph and he took up Newman together.

After F. Joseph’s death, F. Henry was our Newman specialist until his own death. He wrote a number of articles on the Cardinal, but only one book, Newman and His Friends, i.e. the Fathers included in the dedication of the Apologia, which he was told Queen Elizabeth the Queen Mother liked very much. He also wrote the Guide to the Oratory Church, now in its fourth edition and selling regularly.

He also wrote the best part of the history of Newman in Ireland and the Irish University, which he handed over to F. Fergal McGrath SJ when he took it as the subject of his doctoral thesis at Oxford. He also helped with a book on English Ecclesiastical Art. He also kept up a regular correspondence with all interested in JHN, and was engaged in a life of the Cardinal which was never completed. Subsequently, F. Stephen thought he might complete it, but it came to nothing.

F. Henry had his gifts, but also his limitations – he never left England, as much as it would have been helpful if he wanted to consult libraries and check things connected with the life of the Cardinal. Although he lived in Wales in his youth, his family was not Welsh – they had gone there in connection with the construction of the GWR. He told me once that his family ought to have been Catholic, but drifted. His brother and sister both came into the Church, and I understand that they got the parents in before they died. Less pleasantly, F. Henry was very anti-Irish, and it was likely to burst out from time to time. Yet the two members of the Community that he probably saw most of were both Irish, F. Thomas Fullerton and myself. Every evening, after 9pm, in relaxation he always read something light, and he liked – even expected – one or other or both to look in to see him between then and 10.30pm – that was after he had given up spending his evenings in the Little Oratory Rooms, or unless he went down to Caversham.

He never spoke of his youth or early life – to me at any rate – and it was quite a surprise to me – a few years after his death – when an elderly non-Catholic man called here and said that he had been a fellow undergraduate with Henry at the University of Wales – they took degrees there and then went on to Jesus College, Oxford.