The following reminiscence was given during a chapter address by F. Philip Lynch on 16th November, 1987.

When I first joined the Birmingham Oratory, almost all the Community were old boys of the Oratory School. F. Francis Morgan was the third Oratory School boy to join – Richard and Louis Bellasis being the first and second. He had a non-Catholic father; it was on his mother’s side that the Spanish connection lay. He told me that his parents spent part of their honeymoon at Aston Hall, then a private mansion. I always had a fellow feeling for him, as he was not academic, nor did he distinguish himself in school sports.

After leaving school he spent a short time at Mgr Capel’s higher studies institute in London, and a couple of years at Louvain, with his cousin Hubert Galton, before coming back to the Oratory as a novice. As far as I know, he did all his studies in the House, as did the others in those days, and after ordination at the age of 25, he spent his early years in Parish and School work. There was a Sister of Mercy from Handsworth Convent and a number of dedicated teachers, not all academically qualified. In his days the Sunday Masses were at 7 & 8, Children’s Mass at 9.30 and High Mass at 11. Holy Communion was not given after 9.30. Weekday Masses were at 7, 7.45 and 8.30, with a number of Fathers saying private Masses between 7 and 8. There were many more confessions than we have today during the week, and a steady flow of priests coming to confession in the House.

F. Francis had the 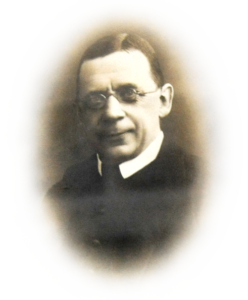 Spanish confessional when we acquired it for the new Church. When F. Charles came at the beginning of the century, F. Joseph took charge of the Parish, with F. Charles as his assistant. F. Francis had a period as Father Minister – which also included the Oratory School – and he was Church Treasurer, counting all the money himself in the Sacristy each Monday – it would amount to about £35.

When Newman was made a Cardinal, one of his dates was at Norfolk House in London, and F. Francis went as his chaplain, as he had been at the Oratory School with the Duke. He used to tell us that they were instructed to tip very generously, or not at all!

F. Francis also liked to visit the more opulent houses in the Parish – like F. Denis – and he liked to say that although not wealthy himself, he had rich friends! As we know, the Sanctuary of the Church was donated by Charles Shaw. Mrs Shaw was a relative of F. Francis, as was Mgr Hubert Galton, whose money built another church.

It was on his mother’s side that all his relatives were in their vineyards in Southern Spain. F. Francis only went home every alternate year, as getting out there was such a business – booking a cabin to Gibraltar there and back on a P&O liner, or other such, and then the long journey by diligence to Puerta Santa Maria. On one occasion towards the end of his life, F. Francis and his bachelor brother, Augustus, who lived in Spain, went to Palestine to see their sister, who had been a Reparatrice nun in Jerusalem for many years and was not very good at English. When they got there, they found that she had gone stone deaf. On some of the years that he did not go to Spain to visit the tribe – as he used to say – F. Francis would spend a week or so at Rednal.

F. Francis also had one or two spells as Minister, which included more than it does now, as he had the Oratory School employees as well as those for the House. I was his assistant for some time when I was a priest-novice.

F. Francis was very interested in the Choir, and when the boy sopranos were in good voice he would describe their singing as drops of liquid gold. He would give F. Robert a cheque towards the Choir, expressed with certain criticisms and suggestions, which would not be adverted to. F. Francis had a pleasing tenor voice and did the Synagoga in all the sung Latin Passions in Holy Week for many years. When not on a public Mass, he always celebrated at Our Lady’s Altar.

His room was the middle one on the front corridor, which he called his cell, but was too crowded to move easily round, including a moving bookcase in the centre. I personally had a fellow-feeling for him as a non-academic, whose sermons and doubts were undistinguished.

His brother, Augustus, lived at Puerta Santa Maria and spoke with a distinct foreign accent. Towards the end of his life, a young Osborne nephew spent about six months in England learning English. His brother never married and died a few years before F. Francis in Spain.

F. Francis himself died in his room at the age of 76. The Oratory was a duller place without him.