The following reminiscence was given during a chapter address by F. Philip Lynch on 7th March, 1988. 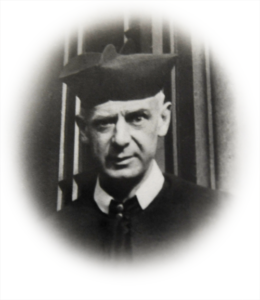 F. Edward Pereira’s family was Portuguese on his father’s side, and they were very wealthy. His mother was a Stonor, daughter of Lord Camoys of Stonor Park, connected with S. Edmund Campion. (NB Special train when travelling to London).

F. Edward Pereira came to the Oratory School at the same time as F. Robert Eaton. They were ordained at the Oratory on the same day and their earthly remains lie beside each other at Rednal. EP, as he was always known as, excelled at School in games and athletics, and he was of the material that would have gone on to Oxford, had Catholics been allowed to go to the Universities in his time. After leaving school at 18, he went to the Collegio Scozzese in Rome, where F. Denis Sheil was already a student, but he only remained there a month, and joined the Birmingham Oratory at the age of 20, and was ordained with F. Robert in 1891.

He always told me that he did no theology; he certainly had no formal course. In those days only those Fathers who had faculties for confessions answered or proposed the moral doubts in the Refectory. F. Edward never had faculties until he became Father Prefect of the Oratory School in 1910.

He won six athletic or sports’ cups while at school, and after his ordination had them made into a chalice, which was stolen while I was at school. Upon his ordination in 1891, he became assistant to F. John Norris in the Oratory School, and remained so for 20 years, until he succeeded him. His cricket was of a high order – he got Warwickshire County colours, playing against the Australians in 1896. All his vacation time in the summer was taken up with it.

There were few places for the Oratory School boys to go during their free time – the class rooms, the library, playground and the gym. EP was aware of this and often took us to his room in the school, well-equipped with books and pictures of EP in the Warwickshire County match against the Australians in 1896, another group with W.G. Grace in London, a complete set of Wisden’s Cricketers’ Almanac, as well as his athletic and cricket caps. He also added a further pastime to his cricket with a collection of musical records.

This period of his school life lasted until 1910, when, with great diffidence, he took over the school from F. John, a period lasting nine years. And it was towards the end of 1916 that I was recalled from the Army to help: I was distinctly below average academically. But he was in difficulties. The war years were a great strain to him, as he worried, and his health was poor. After the war a number of well-known Old Boys began pressing that the Oratory School should move out of Birmingham. They did not offer to finance the project – it was taken for granted that EP would do this, which in fact he did; his entire patrimony was spent on the School.

In 1920 EP retired and went on a long holiday to Egypt. He was succeeded by F. Sebastian, who only lasted a year. Caversham Park was opened in 1921 and EP returned, in charge. He came back a different person, all his doubts gone and full of enthusiasm, but he was not really fit for the work. He got ill once and had to go away for a while, but there was always trouble, and in the middle twenties a non-Oratorian was made Head. EP remained on for a term, but eventually came back to Birmingham.

We enter the last phase of his life, which lasted some few years, in which he was given a confessional for the first time in his priestly life, which he much enjoyed. He did his share of duties.

His health was always poor, and he suffered a lot, and ultimately he developed cancer of the throat, and during his last few weeks could only receive nourishment through a tube. His entire fortune and almost all of his life had been devoted to the Oratory School, and he is one of the most generous benefactors of the Oratory. All his capital was spent on the Oratory School, mainly at Caversham. He also financed the Preparatory School there under F. Sebastian Ritchie. His will was poor – some £9.

EP was convinced that he had passed his capacity of running the Oratory School when he retired in 1921. He came back a year later full of confidence, because there was no-one else in the Community to run the School, and because he had undertaken to finance the move to Caversham Park out of his own fortune. All the time there he felt independent, spending his own money. As the years went on the bank overdraft grew and the Fathers became more and more doubtful.

EP also financed an Oratory Preparatory School at nearby Ensor Green and put in F. Sebastian Ritchie (who had failed as Headmaster of the Oratory School in 1919-20). This was entirely a work of EP’s and it closed down when the Oratory School was sold to the BBC, and was bought by the Salvation Army.