A reminiscence of Mr Harold Johnson:

Whenever F. Denis was invited to tea in Beaufort Road or Plough & Harrow Road, I always took him. If the weather was wet, he was taken and brought back by car. One day – it was the Feast of S. Valentine, and we always went through the Church – Father Denis said he would like to say a prayer for me at S. Valentine’s Altar, for which I thanked him. Outside the church, I asked him what kind of a priest Cardinal Newman was. He told me that the Cardinal was strict regarding the rules, but at the same time was very kind. 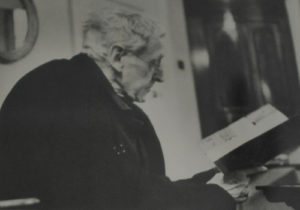 On another occasion, when I entered the Church with Father Denis, someone asked for Confession, so I sent him to the front door. F. Denis asked me what he wanted and when he learned that he had wanted Confession, he said to me, ‘I could have heard him.’ He didn’t mind being late for his tea! He thought the man’s confession more important.

For those readers too young to remember F. Denis Sheil, a few facts may be of interest. He was born in Dublin in June 1865, the son of Sir Justin Sheil. He came to the Oratory School in 1875 and, in 1884, went to the Scots College in Rome to train for the priesthood. F. Denis was ordained in Rome in 1889 and entered the Oratory early in 1890 – the last novice received by Cardinal Newman. He was Superior from 1923 until 1932. He was 6ft 4in tall and, as his obituarist wrote, had, ‘impressive dignity, gentle manliness and Victorian courtesy.’ He died at the Oratory in June, 1962. I remember F. Basil Lynch’s recounting how, one summer’s evening, he was passing the open windows of a pub in Ladywood, when a voice was heard within, declaiming: ‘Father Denis says…’

The following recollections by Mr Arthur Hunt are taken from the Oratory Parish Magazine for Saints Peter and Paul 1998.

I remember Fr Denis Sheil as the wonderful priest who lived, or so it seemed, inside the confessional box in the shadow of the pulpit. Tall, stooping, white-haired, with a whispering voice (and the unusual middle name of “Florence”!) he was a famous and dearly-loved member of the Congregation which he joined in January, 1890, only a few months before Cardinal Newman’s death.

So began one of the longest careers as an Oratorian – the whole of seventy-two great years. From 1923-32 he was the Father, and although seemingly quiet, to the point of apparent shyness, Fr. Denis exercised great influence especially about the appearance of the Church building, in which he received much help from Fr. Francis Morgan.

A great parish priest, Fr. Denis was a regular and welcome visitor to his parishioners. The sick and the housebound were especially delighted to see him, which they did regularly and often. Audrey Wardell remembers with much pleasure his prompt arrival at 3.00pm on Sundays for a “proper tea with thin bread and butter” followed by his equally prompt departure at 4.00 o’clock.

My wife’s mother found Fr. Denis very knowledgeable about antique china. Round the streets of Ladywood he was widely recognised by his big black cloak.

The Parish showed its appreciation of his loving loyal service by paying for the beautiful decoration of the ceiling of the church in celebration of the 70th anniversary of his priesthood – a fitting tribute for his many years as an Oratory Father.

Fr. Denis was related to an Italian Cardinal and spent some time in Rome, where he was quite well known. But as already mentioned, it was as a Confessor in his own church that he exercised his greatest influence and came home most effectively to “men’s business and bosoms”.

Every evening, immediately after dinner, Fr. Denis would enter his box, and there he stayed until the lights went out. Not only parishioners, but penitents from all over the city – including many priests – came to him for his sympathetic and constructive help. He was always there, encouraging, telling us “not to worry”.

As he neared the end of his wonderful life, he suffered badly from vertigo, but did not let it hinder him from continuing his great work. I am certain I am not the only one to remember Fr. Denis with affection and deep gratitude.