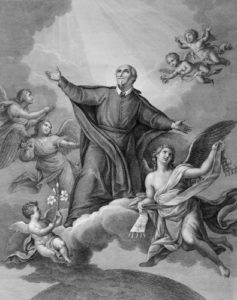 Sebastian Valfrè is one of the most important members of the Piedmontese clergy, and the forerunner of the many Saints who have graced the Church of Turin in recent centuries. Sebastian was born at Verduno, in the Diocese of Alba, on 9th March, 1629. His family was poor, but despite hardships and difficulties he managed to follow a course of studies at Alba, Bra and finally Turin.

He joined the Oratory of Turin on 26th May, 1651, and was ordained priest on 24th February, 1652. He gained his doctorate in theology in 1656. He went on to hold many of the offices at the Oratory and, although he declined being made Archbishop of his city, he nevertheless, through his tireless work, is honoured as the Apostle of Turin. His particular concerns were the teaching of the Catechism, hearing confessions, giving spiritual direction, helping the poor and the sick, widows, orphans and prisoners. Sebastian became confessor to the Piedmontese Royal Family and his influence at Court enabled him to do much for the poor of the city. He was greatly devoted to the Shroud of Turin, and there is a print in existence showing him supervising some repair work being done to the Shroud.

During his years in Turin the Kingdom endured several wars, including a siege of the city. He organised practical aid for the soldiers – so much so that today he is invoked as the patron of military chaplains. He introduced to Turin the Forty Hours Devotion to the Blessed Sacrament, and encouraged devotion to Our Lady, inspiring King Victor Amadeus II to build the Basilica of Superga. Sebastian also helped in the founding of the Accademia at Rome for the training of Papal diplomats. He is remembered, too, in difficult times, for striving to build up good relations with both Protestants and Jews in Piedmont.

The Archives of the Turin Oratory possess some 22 volumes of his writings. One of his most important works was his ‘Compendium of Christian Doctrine’, a catechism organised on a question and answer basis. This rapidly became a well-used teaching aid, and lasted until the introduction of the Catechism of Pope Pius X.

The Father who had Paradise in his eyes died at Turin on 30th January, 1711, and was beatified by Pope Gregory XVI on 31st August, 1834. His body rests in a silver shrine in the Oratory Church in Turin. His feast is kept each year on 30th January.

Blessed Sebastian Valfrè, pray for us!