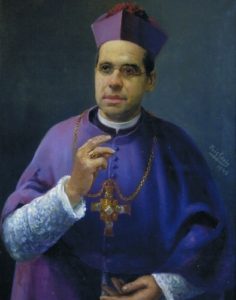 Salvio Huix Miralpeix was born on the 22nd December 1877. His family were devout Catholics. Priests often visited their house and there were priests in the family, and it was no surprise when young Salvio announced his intention to offer himself as a candidate for the priesthood. He entered the local minor seminary at the age of ten and excelled at his studies, not on account of any exceptional intelligence but simply because of his application to hard work. Those who knew him said that he would always do everything as well as he possibly could. He was a practical person and not given to day dreaming. The virtues noticed in him by his fellow students were those which were later to be admired by his fellow Oratorians: his obedience, his joy and warm heartedness, his capacity for hard work, and his avoidance of any type of publicity or acclaim. It is said that as a young man he sometimes had to work hard at controlling a fiery temper.

Salvio was ordained priest on 19th September 1903. He worked first as a country curate and then in 1907 at the age of thirty he entered the Vic Oratory (Catalonia, Spain). The Fathers at Vic rose at 4:30am every day except on Sundays and feast-days, when they got up half an hour earlier. After an hour of mental prayer they would hear confessions in church and, after the last penitent had been shriven, would then say their Masses at the side-altars in the church. The afternoon was spent back in the confessional or working with one of the groups attached to the Oratory church, e.g. the Brothers of the secular Oratory. They visited the sick and catechized the children. Fr. Huix became aware that there was nothing provided to help young married men, who seemed to have little part in the life of the Church. He felt that religion which attracted only women and children was deficient, so he started a confraternity for married men under the patronage of St. Joseph.  He got those men to help the sick not just by visiting them, but also by looking after their material needs. He himself was not afraid to get his hands dirty, and when he wasn’t busy in the confessional or teaching at the seminary he was most likely to be found tending the sick, washing them and changing their bed-linen.

By 1927 Fr. Salvio was provost of the Vic Oratory and was then nominated as bishop of Ibiza. The island had been without a bishop for sixty nine years and his appointment was greeted with great joy. A photograph of his arrival shows the quay crowded with hundreds of cheering people. His episcopal consecration on 28th April 1927 meant that he had to leave his Congregation, but spiritually he remained a son of St. Philip. As bishop he showed himself to be a caring pastor and very practical. His clergy were impecunious, and he organised a life insurance scheme to guarantee them some security in their old age. He encouraged the laity in the social apostolate.

In 1931 Spain was declared a republic. Within a few weeks the new regime made itself felt. In Madrid and elsewhere convents were pillaged and burned; the Jesuits were suppressed; the archbishop of Toledo was expelled; all schools run by religious Orders were closed; cemeteries were secularised and Catholic burials were forbidden. All crucifixes were ordered to be removed from the cemeteries. On Ibiza men carried the great crucifix from the cemetery to the cathedral doors, where the bishop himself carried it to the sanctuary. Bishop Salvio was not intimidated by the anti-religious regime, and in his Lenten pastoral letter of 1932 he told his people that even though the dogs bark and the pigs grunt, the sun and the moon will continue to shine.  He remained bishop of Ibiza for eight years and then in 1935 was translated to the diocese of Lerida on mainland Spain.

In July 1936 the Spanish Civil War broke out. Between July 1936 and March 1937 there was a terrible onslaught of violence against the Church and thousands of people were killed. By the end of the war 6,832 priests and religious had been killed, including 12 bishops and 283 religious sisters. On the 18th July there was a military uprising against the republican government. Two days later the city of Lerida was in the hands of republican forces, who burned the cathedral and the churches of the city. In only a few months eighty per cent of the priests of the diocese were killed. The last photograph of Mgr. Huix taken in June 1936 shows him flanked by the priests he had just ordained. Within a month all but one of those new priests were dead, together with their bishop. One of his young seminarians (about fifteen years old) was given a mock trial. The crowd shouted for his death and the so-called judge went through the motions of washing his hands before condemning the seminarian to death. The boy was beaten, stripped and nailed to a beam, where he died.

On the night of the 21st July, after republicans had burned the cathedral, they turned their attention to the episcopal residence. Whilst they were beating down the doors, Bishop Huix, his secretary, the porter and the porter’s daughter, confessed, consumed the Blessed Sacrament, and escaped by the back door. It seems the bishop had expected something of the sort to happen and had kept a suitcase packed and ready. At first he took refuge in the house of his gardener, but realising the danger to which he was exposing the gardener and his family he gave himself up to the police. He said, ‘I am the bishop of Lerida and I place myself under your protection.’ The police promptly handed him over to the republicans, who imprisoned him. Many of the leading people of the city and a number of the clergy were already in the prison. All were struck by the bishop’s cheerfulness and his continuing care for his flock. On the feast of St. James he celebrated Mass using vessels that had been smuggled into the prison. He administered Holy Communion and heard confessions.

Early in the morning on the 5th August (the feast of Our Lady of the Snows) the bishop and twenty others were told that they were going to be taken for trial at Barcelona. Outside the city the lorries stopped by the cemetery and the prisoners were told to get out. Realising they were about to be killed, the group asked their bishop for his blessing. He blessed them, saying, ‘Be brave, for within the hour we shall be reunited in the presence of the Lord.’ They recited the Credo together and were made to dig their own graves. Mgr. Huix was offered the chance of saving his life if he would abjure the faith. He refused, but asked as a favour that he might be the last to die. As each was killed, the bishop blessed them. One of the militia men objected to that blessing and shot him through the hand, so he continued to bless them with his left hand. In a subsequent written testimony the man who administered the final shots to those who were killed recounted what a quantity of blood was spilt, and that the sinews of the bishop’s arms were exposed through having been shot a number of times.

Bishop Salvio was not the only priest of the Oratory to lose his life in the Spanish Civil War. Four priests from the Barcelona Oratory were killed, five more from the Gracia Oratory and the provost of Vic. Those priests are the proto-martyrs of the Congregation of the Oratory. Bishop Salvio Huix Miralpeix was martyred for the faith and showed himself a true pastor in caring for his flock until the very end. He was beatified in Tarragona cathedral on Sunday 13th October 2013. His feast is to be celebrated each year on 6th November.