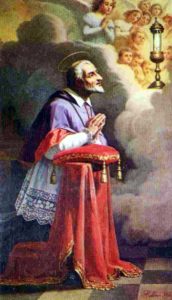 John Juvenal Ancina was born at Fossano on 19th October, 1545. He studied at Montpellier, Padua, Mondovì and Turin, and graduated in both medicine and philosophy. He was also an accomplished man of letters and a musician of some note. In 1574 Juvenal moved to Rome and attended the theology lectures of Cardinal (later Saint) Robert Bellarmine, and joined in the spiritual exercises at the Oratory. On 1st October, 1578, he entered the Oratory and was ordained priest on 9th June, 1582 and after that dedicated himself entirely to the Oratorian apostolate, for which his many natural talents so well equipped him.

In 1586 Juvenal was sent to Naples to help the newly founded Oratory there and he threw himself into many different activities. He quickly gained a reputation as a fine preacher. He also used his musical talents to help the growth of popular piety – especially remembered is his ‘Tempio Armonico della Beatissima Vergine’, a collection of spiritual songs for three, five, eight and twelve voices. Juvenal helped to develop many other cultural interests in Naples and involved in this work of the Oratory many of the great aristocratic families. Through the ‘Oratorio dei Principi’ he helped to bring Catholic standards into the lives of many influential people. In the autumn of 1596 Juvenal was recalled to Rome, where Pope Clement VIII told him he had decided to make him Bishop of Saluzzo, in the north of Italy, where the inroads of the heretics were giving cause for concern. Juvenal had misgivings, and it was not until August, 1602 that he accepted the nomination as Bishop: he took possession of his diocese on 6th March. 1603.

Juvenal’s time as Bishop was very short because he died of a suspected poisoning on 30th August, 1604, crying out as he died ‘Sweet Jesus and Mary, give peace to my soul’.

His brief episcopate was nevertheless a fruitful one and was marked by many initiatives designed to help his people grow in piety and charity. Within a month of entering his diocese he began the work of reforming the lives of both clergy and laity. He sought to combat heresy, convoked a Synod to implement the decrees of the Council of Trent, announced the founding of a Seminary and organised devotions to increase adoration of the Blessed Sacrament. He also placed great emphasis on the instructing of the faithful in the teachings of the Church and introduced the use of the Catechism. People soon came to hold him in high regard – not least his next-door neighbour, the Bishop of Geneva, Francis de Sales, who appreciated his humble and peace-loving character.

Juvenal’s body rests in Saluzzo Cathedral, under an altar dedicated to him. He was beatified by Pope Leo XIII on 9th February, 1890, and his feast is kept each year on 30th August.

Blessed Juvenal Ancina, pray for us!