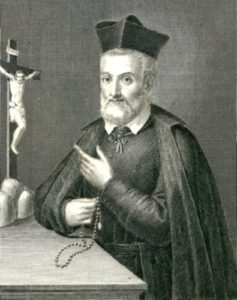 Antony Grassi was born at Fermo in the Marche of Italy on 13th November, 1592. From his earliest days he led a simple and austere life, frequenting the church of the Oratory in his home town. He entered the Congregation of Fermo on 11th October, 1609, and was ordained priest on 17th December, 1617. Antony exercised his priestly ministry in instructing the ignorant, comforting the weak, visiting the sick and imprisoned, helping the troubled and encouraging youth in the ways of holiness.

In the Holy Year of 1625 he went as a pilgrim to Rome and visited with great devotion the basilicas and catacombs. An especial highlight would have been his visit to Saint Philip’s shrine and the places associated with the Saint’s life. Because of Antony’s apostolic life and his great love for the Oratory, his community elected him as their Superior in 1635, and he was to hold that office for the rest of his life.

He was a man of deep prayer and was privileged to receive many mystical experiences. People sought his advice, especially through the confessional. It was here, he said, that the priest should always show compassion and seek above all to help and comfort the repentant sinner.

Antony was called ‘The Angel of Peace’ because of the gift he had of reconciling enemies. He was also called ‘The Father of the Poor’ because he continually gave away all his possessions, even his clothes, to those in need. He cultivated a great devotion to Our Lady – the ‘Mother of our House’, as he called her – and on numerous occasions went on pilgrimage to Her shrine at Loreto. It was here, on 4th September, 1621, that he survived being struck by lightning – his clothes were all burnt, but he himself was unscathed. Popes Clement X and Innocent XI held him in the highest regard, as did the Oratorian Cardinal Colloredo, who was to be responsible for beginning the Process for his beatification.

As his end drew near, he repeated continually to the members of his community: ‘What a beautiful thing it is to die as a son of Saint Philip.’ Surrounded by his loving brethren and with the Archbishop of Fermo present, he died on 13th December, 1671. His reputation for holiness, evident during his lifetime, grew rapidly after his death, and devotion to him spread through Italy and Germany and many miracles were reported through his intercession. Antony was beatified by Pope Leo XIII on 30th September, 1900. Since 1966 his body has rested under the High Altar of the Carmelite Church in Fermo. His feast is kept each year on 15th December.

Blessed Antony Grassi, pray for us!