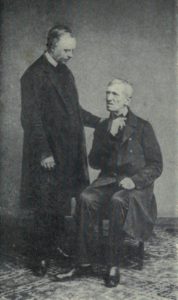 Ambrose Maria St. John (1815-75) was the grandson of St. Andrew St. John, Dean of Worcester. He was educated at Westminster School, and went up to Christ Church College, Oxford, in 1834. He took his B.A. degree in 1837, and was elected to a studentship in 1838, which he held until 1845. He was a keen Hebrew scholar, having been a pupil of Pusey’s, and a keen general orientalist, as his books in the Oratory Library witness; he was also a good classicist.

He took orders soon after his degree, and from 1841-43 was curate to Newman’s intimate friend Henry Wilberforce, first at Bransgore in the New Forest and then at Walmer near Deal. It was Wilberforce who was to provide the link with Newman, who first met St. John at the consecration of the Church at Ampfield, in John Keble’s parish, in April 1841.

In August 1843, suffering increasing doubts about the Church of England, he went to live at Littlemore. He left in September 1845 for a visit to Prior Park, and after three days there, was received into the Roman Catholic Church. He studied for the priesthood in Rome with Newman, and was one of the founding members of the English Oratory. He remained at the Birmingham Oratory for the rest of his life and cheerfully gave himself to whatever tasks he was required for, the most unexpected being the oversight of the Oratory School from 1862 until 1873. Newman paid him an important tribute in the dedication to the Apologia pro Vita Sua.